Drive: A road trip through our complicated affair with the automobile
by Tim Falconer 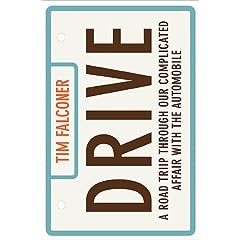 Falconer talks about the history of automobiles, Detroit then and now, car culture, the quirks of traffic, urban sprawl, and much more, all structured around a long road trip of his own. Somehow he manages to treat all the various viewpoints with great sympathy and doesn’t shy away from that word complicated in the title.

His topics range from the expected:

Most people equate automobiles with freedom, and the more they have, the greater the independence, but the executive director of DU’s Rocky Mountain Land Use Institute doesn’t see it that way. “Owning three cars is enslavement,” he told me, citing all the time and money needed to maintain vehicles. “If we walk or bike, we can be free. That, in fact, is more freedom than being forced to buy three cars.” (p.211)

to thought-provoking side-effects of urban sprawl:

it dawned on me that sprawl encourages impaired driving. People heading out for a night on the town, or even a dinner that includes a bottle of wine, don’t want to take a cab because they can’t flag one at the end of the night — and they have to travel so far they couldn’t afford the fare anyway. So they drink and drive. (p. 141)

In an appendix it contains an amusing playlist of car tunes, which is really an indispensable part of any road trip. Nicely done.

2 thoughts on “Drive: A road trip through our complicated affair with the automobile”