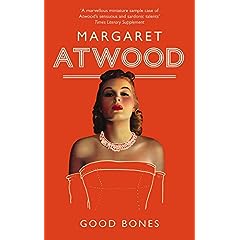 Short stories — very short, most are only a few pages. Many touch on themes of gender. Some of the best ones showcase Atwood’s needly humour, ranging from a perfect satire of PC fairy tales (There Was Once) to a sendup of gender roles (Making a Man) to a brilliant mashup of war and beauty pageants (Epaulettes):

The competition itself is divided into several categories. Each one of these is designed to appeal to the female temperament, though there has been some difficulty in determining exactly what this is. For instance, the “aroma” category — in which the condensed essences of the competitors’ sweat-socks, cigars, used tennis shirts, and so forth — had to be discontinued, as it made too many women sick. But the name-calling, muscle-flexing and cool-dressing bouts remain. So does joke-telling, since it is well known that women prefer men with a sense of humour, or so they keep telling us. In addition, a song must be sung, a dance must be danced — though a solo on the flute or cello will suffice — a skill-testing question must be answered; and each world leader must describe his favourite hobby, and declare, in a well-modulated exhibition speech, what he intends to do in future for the good of humanity. This is a popular feature, and occasions much giggling and applause.

Not all the stories are so light (An Angel, Third Handed, Death Scenes), but these needle in a different way:

(Snow angels, you’ve seen them: the cold blank shape of yourself, the outline you once filled. They too are messengers, they come from the future. This is what you will be, they say; perhaps what you are: no more than the way light falls across a given space.)