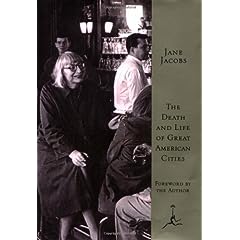 Ten years ago (!) when Citizens for Local Democracy was active, Jane Jacobs would give the most wonderful speeches at meetings, shuffling slowly up to the microphone in her white sneakers. I was (and am) terribly fond of her, and not only because she spoke slowly enough that I could type her words verbatim for meeting notes. She had a real knack for common sense, plain (but slightly old-fashioned) speech, immense stubbornness and understated wit — all of which are plentiful in The Death and Life of Great American Cities.

Don’t let the rather dry title put you off — this is a wonderfully readable book, full of stories and anecdote, distinctly short on pretense. Jacobs was interested in what makes a city (or neighbourhood) livable. She sets out a few basic principles (I’m making this sound dry and nasty, I know), talks about them, and talks about the various unconscionable ways in which urban planning fails to pay any attention to these commonsensical notions. After you’ve read this book you’ll look at neighbourhoods (and cities) with extra interest — or perhaps you’ll just have your own casual observations confirmed.

Death and Life was published in 1961 and I’ve yet to see a credible refutation of any of her basic principles. I’ve also yet to see urban planners pay much attention to them. Talk about institutional inertia.

3 thoughts on “Book #9: The Death and Life of Great American Cities”