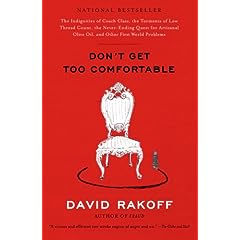 Don’t Get Too Comfortable is a series of Rakoff’s essays on the simultaneous pleasantness and embarrassing excess of modern American life — as it says on the cover, “the indignities of coach class, the torments of low thread count, the never-ending quest for artisanal olive oil, and other First World problems”. It’s presented as satire, but while he freely skewers trends and American society as a whole, he’s often surprisingly gentle to individuals (with the notable exceptions of himself and Karl Lagerfeld) — more “awwww” than “ooh, that must hurt”. On a man who has the peculiar and thankless job of working for an advocacy group of gay Republicans:

It is Guerriero who has used the word “bearable” numerous times over the course of our lunch, always to justify his remaining in the job. My delusions are of a different, somewhat patronizing variety. Looking across the table, I keep thinking that Guerriero will take off the mask at any moment. Here we are, after all, away from the dreary office, both gay, enjoying a sprightly conversation about politics without rancor or name-calling. At some point, he will see the futility of trying to fight for gay rights within the Republican Party and off we’ll go to the nearest independent bookstore (with a brief stop at the Phillips Collection to see its wonderful Edward Hoppers) to buy Al Franken’s latest tome, all the while laughingly shaking our heads at Guerriero’s misguided, delusional episode working for Satan. What I am feeling about Guerriero has been felt about intelligent, handsome, confirmed bachelors such as him from time immemorial. I am thinking: I can change him.

If it’s biting satire you’re looking for, this isn’t it. But he writes well and it’s a very pleasant read.